During the development of the Cohesive Strategy for the Western Region, Stakeholders commented that restoring healthy forests and reducing hazardous fuels on public lands was, as a task, daunting. The challenge is compounded when land managers face natural events requiring time-sensitive response, for example, mountain pine beetle epidemics, which have affected about 41.7 million acres in the United States in the past 15 years. Rising to the challenge, the Black Hills National Forest, which manages 1.2 million acres of National Forest System lands, has innovated an approach to applying the National Environmental Policy Act (NEPA), for timely and adaptive management. The Mountain Pine Beetle Response (PBR) Project environmental analysis method has led to an unprecedented decision to adaptively improve and protect the Black Hills National Forest, serving as a model for the Nation.

The planning team developed the PBR at the landscape scale, covering 250,000 acres in both South Dakota and Wyoming (see map below). The scale represents a tenfold increase in the scale of environmental analysis and significant cost-savings because of conducting one landscape-scale analysis in lieu of many exhaustive analyses of similar but discrete projects. To swiftly address expanding beetle populations and reduce hazardous fuels now and in the future the project includes adaptive design features, along with effectiveness monitoring throughout the life of project for information and decision points for adapting management approaches. Extensive collaboration continues and expands the buy-in and public support necessary to get the work done and sustain momentum. 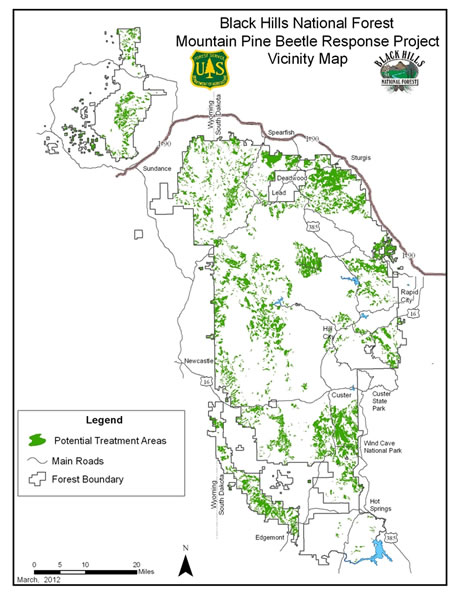 The Forest engaged with all levels of the agency, states, the Environmental Protection Agency (EPA), and the Council on Environmental Quality (CEQ) to help shape and refine its approach for the Final Environmental Impact Statement (FEIS) and Record of Decision issued on December 10, 2012. The Decision calls for forest health treatments on portions of 248,000 acres of National Forest System lands in South Dakota and Wyoming to reduce the risk of Mountain Pine Beetle and fire hazard. Up to 122,000 acres will be commercially thinned over the next five to seven years. The Decision incorporates monitoring and evaluation to effectively learn and adapt practices, and continues the Forest's collaboration with communities and cooperators to prioritize treatments to be most cost efficient. New streamlined agreements were crafted with States to ensure cultural resource protection. This is the first project of its type to meet the Chief's goals with Forest Leadership committed to its successful implementation and is already sharing the results nationally.

Extensive upfront and ongoing collaboration with the National Forest Advisory Board and other local partners has resulted in strong stakeholder ownership of and support for the PBR's adaptive resource strategies, public land stewardship practices, and mutually beneficial outcomes. Engaging national partners such as the EPA and CEQ has resulted in more innovative and science-based approaches to managing dynamic, disturbance-based ecosystems and large landscapes. Creative partnerships have attracted millions of dollars of investment from partners such as Wyoming and South Dakota's governors, affected counties, and private stakeholders to increase collective capacity and facilitate more timely and effective treatments.

The PBR Project presented unique circumstances for the Black Hills National Forest and the Forest Service. Like much of the Western United States, the Black Hills continues to experience an ongoing mountain pine beetle (MPB) epidemic and it remains the most widespread public concern. In the Black Hills area, some 416,000 acres have been affected by MPB since 1996. The aerial survey from 1999 detected an estimate of 25,562 trees killed throughout the Black Hills. This is an increase from the 10,726 trees killed on National Forest System lands in 1998. In 2000, the amount of mortality increased again to 38,262 trees. In past years, the Forest became highly successful in completing landscape-level environmental plans resulting in nearly 264,000 acres of treatment in selected landscapes. The problem was that traditional approaches could not keep pace with the epidemic in terms of scale and capacity to be timely and respond in the right places.

The mountain pine beetle (MPB), a native insect, has rapidly expanded in the western United States and in the Black Hills. According to the Western Bark Beetle Strategy (WBBS), pine beetles have infested approximately 41.7 million acres in the United States over the past 15 years. The situation has grabbed public attention in terms of scenery, increased dead fuel load, economic and natural resource impacts, and public safety. The WBBS calls for actions to address public safety, restore forests, and make forests more resilient to mountain pine beetle impacts.

The February 2012 publication, Increasing the Pace of Restoration and Job Creation on Our National Forest, states, "…Using the anticipatory, flexible EIS process provides the ability to act quickly when unexpected disturbance events (e.g., insects, disease, weather, fire) occur in the future…environmental analysis will be completed across a large area, identifying areas where action can be taken quickly without the need for additional environmental reviews, and allowing for more focused and hence more expedited subsequent environmental reviews in remaining areas." This approach in planning environmental projects will allow managers to more quickly assess and adapt actions on the ground on a much larger scale.

The PBR Project falls under the authority of the Healthy Forests Restoration Act of 2003.