Barnegat Township, New Jersey, is a community prepared for wildland fire. For longterm residents of the area, which includes significant tracts of Pine Barrens with very high wildland fire risk potential, wildland fire is a known part of life and an expected periodic occurrence. While fire is familiar and to some extent understood as a part of this landscape, following two evacuations in 2007 and 2008, the Township faced the need to protect a significant number of homes abutting the forests. Now with a flourishing peer to peer network of Firewise collaborators, cooperating government agencies, and volunteer fire department professionals they have laid out and tested a Community Wildfire Protection Plan (CWPP) based on lessons learned from fires since 2007. How did they do it? Their answer was a concerted effort to meet with and include all groups affected, spread the word neighbor to neighbor, and draw on the strengths of existing organizations’ experience in this historically fire prone landscape.

Barnegat Township is situated on the east side of New Jersey with coastal and heavily forested terrain replete with fuels, westerly winds, and single family homes in the woods. In 2007, 2008, and 2010 wildland fires burned in sections of the Township, and in 2012 Hurricane Sandy forced evacuations for area residents. Notably, the effective evacuation routes and shelters used for Sandy were first established for residents during the previous fires. 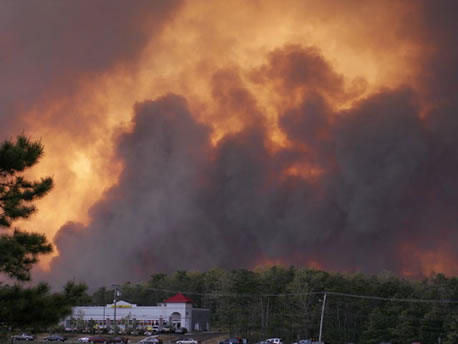 The Barnegat Fire Department, composed of volunteers, and officially named Barnegat Volunteer Fire Company No. 1, Inc., has tackled Township conflagrations since 1909. Their local proficiency teamed with New Jersey State Forestry Services-Forest Fire Service to develop the CWPP. To build a plan preparing the Barnegat community for wildland fire, the fire department also called in emergency management and the police chief, some nontraditional entities for the State Forest Fire Service, to further local collaboration.

Making the plan on the municipal level would require involvement beyond the scope of the state agency alone, so contractors assisted to bridge communications locally. New Jersey’s soil districts, spread out through the state, maintain the sort of local relationships needed to create the plan, so were available to fulfill duties through shared services agreements, and “be accountable for completing the tasks that needed to be done to produce the plan,” explains Bill Brash of Mercer County Soil Conservation District and a New Jersey Approved Consulting Forester.

Another involved and proactive advocate for fire preparedness and safety came in the form of Horizons at Barnegat, an over-55 community of 164 homes located on 99.99 acres within Barnegat Township. Horizons residents’ backyards meet dense woods of pine inaccessible to mechanized firefighting equipment, making fire response difficult and dangerous. Clearing fuel breaks became a logical and timely consideration for the community, after facing multiple evacuations. 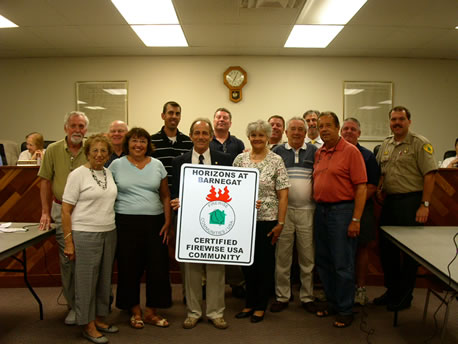 As always with projects occurring in wild landscapes, there was some initial consternation about what would become of the “natural” appearance of the pine forests that comprised many residents’ backyard view. Some residents had bought homes specifically to be in, near or next to the forests, and wondered how the visual quality would change by creating vehicle access points.

Explaining the need for action and demonstrating the benefit of a fuel break project was Gregory McLaughlin, Division Firewarden, New Jersey Forest Fire Service. In community meetings McLaughlin, and subsequently members of the Horizons community, educated other local residents, the board of trustees and homeowners associations about Firewise’s work. There would be no clearcutting and no topping trees, while clearing only enough area to allow firefighters safe space to protect homes and control wildland fires. In June 2008 two meetings for Barnegat Township featured a panoply of the informed –military representatives, the New Jersey Forest Fire Service, the Pinelands Commission, U.S. Forest Service, county, municipal officials and Rutgers University – who summarized area studies of past fire history, population growth areas, and methods of mitigating wildfire hazards and risks, tailored for Barnegat. With this information, and the leadership of McLaughlin, Horizons became a Firewise Communities/USA site on January 5th, 2009.

Horizons has been very diligent in creating incremental fuel breaks. Overall, McLaughlin reports, “Barnegat Township is beginning to live with fire, talking to their neighbors, doing hazard mitigation at township and local sub-community levels, and keeping relationships with the Office of Emergency Management (OEM), volunteer fire companies, the township and other communities to maintain a local solution.” Brash adds that the most interesting part for many people is learning how they can individually step up to get involved in preparing for fire in the local area.

Learn more about this Firewise Community at Horizons at Barnegat.